Divining the targets of Beijing’s latest de-risking campaign is becoming an essential trading strategy. Those who failed to take heed of warnings about asset bubbles by officials were steamrolled by a $1.3 trillion rout in Chinese equities, with the most popular stocks bearing the brunt of the selloff. That came […]

Those who failed to take heed of warnings about asset bubbles by officials were steamrolled by a $1.3 trillion rout in Chinese equities, with the most popular stocks bearing the brunt of the selloff. That came shortly after Beijing stunned millions of would-be investors by canning Ant Group Co.’s $35 billion listing at the 11th hour, despite evidence that regulators had growing concerns over its business model. In another sign of complacency, Tencent Holdings Ltd. neared $1 trillion in value even as the fintech industry came under attack, only for the stock to then suffer its worst week since 2011.

Quick reversals in asset prices show how the Communist Party remains an outsized influence on China’s financial markets, despite the increasing presence of foreign investors. While regulators are more vocal about their intentions than in the past, Party policy remains opaque to outsiders. What’s clear is Beijing’s determination to tackle risk after last year’s stimulus pushed leverage to almost 280% of economic output.

This month alone, the nation’s banking watchdog warned about leverage in the industry, a deputy governor of the central bank proposed creating a new “Financial Stability Law,” and Premier Li Keqiang spoke of the “formidable tasks” China faces in reducing risks in the financial system. The securities regulator chief said Saturday that large flows of “hot money” must be strictly controlled.

While the new fronts in the battle against destabilizing elements are disturbing — and penalizing — investors, officials have so far succeeded in deflating bubbles without creating panic. The CSI 300 Index of stocks is more than 40% above last year’s March low and has steadied around 5,000 points since state-backed funds entered the market. A year-to-date record $10 billion worth of corporate bond defaults hasn’t undermined confidence in higher-rated debt. China’s government bonds are among the world’s least volatile.

Xi Jinping’s government is taking advantage of an economic recovery to deleverage, a longstanding goal shelved during the trade war with the U.S. and further delayed by the pandemic. China accumulated much of its record debt pile after the global financial crisis, when it binged on credit to avoid the economic slumps ravaging the West. Efforts in 2017 to restrain debt growth, especially in the shadow-banking industry, led to higher money-market rates and a slump in government bonds.

“Markets are in danger of experiencing a replay of 2017 and 2018,” said Shi Min, director of credit investment at Beijing Lakefront Asset Management Co. “In 2018, private enterprises and real estate suffered the most. This year, local state-owned enterprises with excess capacity and high leverage are the targets.”

Beijing’s caution stands out as money gushes from the world’s major central banks and the Biden administration prepares to unleash its $1.9 trillion spending package. The divergence is the major reason why the CSI 300 Index of stocks is headed for its worst month since 2016 relative to MSCI Inc.’s global benchmark.

The focus on deleveraging will likely continue to affect the most vulnerable parts of financial markets. Along with expensive stocks, the housing market and its indebted developers, local government financing vehicles and energy producers are at risk.

“Financial stability will face more complex and severe challenges. We need to attach great importance to it and deal with it steadily, actively and effectively curb the spread of financial risk contagion, and resolutely maintain the bottom line of avoiding systemic financial risks.”

Liu Guiping, a deputy governor of the People’s Bank of China, wrote in a March 16 article.

The campaign against risk has accelerated since November as it became clearer that stimulus was working and Donald Trump would no longer be a threat to China. The week after Ant’s share sale was spiked on Nov. 3, Beijing proposed new rules to curb monopolistic practices in the internet industry — which became law after just three months. Financial regulators are now targeting Tencent for increased supervision.

President Xi last week warned against excess in the nation’s tech firms. Years of loose regulatory oversight had allowed the likes of Alibaba Group Holding Ltd. and Tencent to grow into sprawling empires, with businesses essential to the lives of millions of Chinese.

With Xi seeking to consolidate power as Communist Party chief after his second term expires next year, ensuring stability is maintained will be key to the success of the de-risking push. PBOC Governor Yi Gang said Sunday that China still has room to pump liquidity into the economy while keeping its leverage ratio stable.

“We remain optimistic that China can manage the deleveraging process without a credit crisis or a hard landing,” wrote UBS Global Wealth Management’s chief investment office in a March 3 report, led by Mark Haefele and Min Lan Tan.

— With assistance by Jing Zhao, and Rebecca Choong Wilkins

It's been 2 weeks since Texas lifted its mask mandate. Here's how business owners are handling it

Wed Mar 24 , 2021
Gov. Greg Abbott announced March 2 that he was lifting the mask mandate. A week later, businesses of all types were allowed to open to 100% capacity. On top of that, people who decide to not wear masks can’t be punished by law, Abbott’s mandate says. “It’s amazing what people, […] 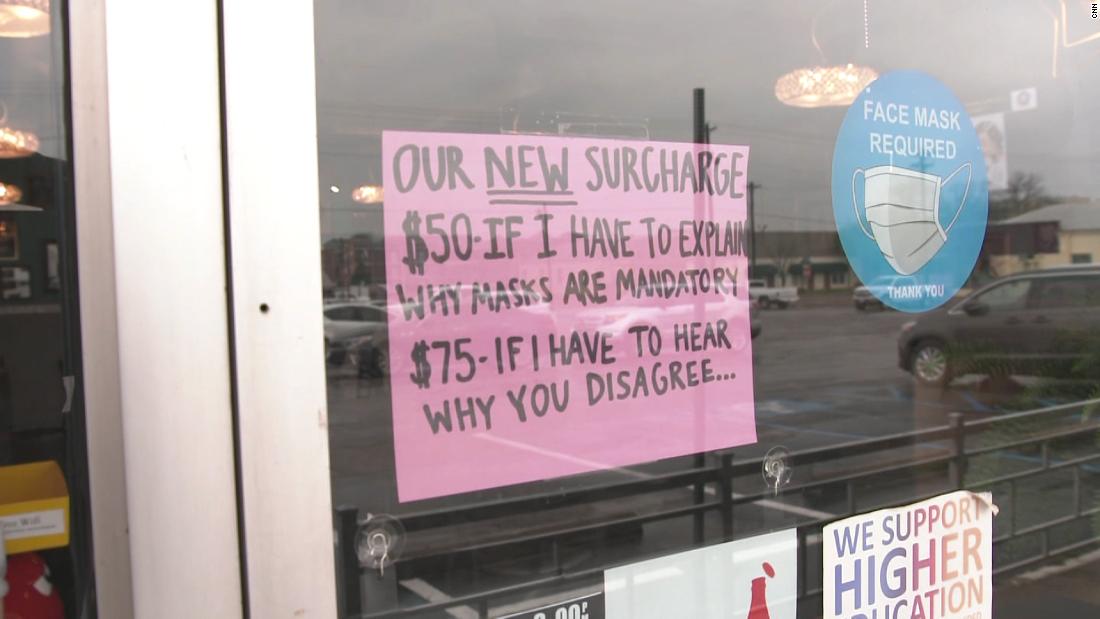