Guilty on all charges! After a three-week trial, a now former Minneapolis police officer is convicted for the killing of an unarmed Black man that sparked protests worldwide, including in downtown Salt Lake City. While this may bring a sense of justice and “victory” to so many, can there be […]

Guilty on all charges! After a three-week trial, a now former Minneapolis police officer is convicted for the killing of an unarmed Black man that sparked protests worldwide, including in downtown Salt Lake City. While this may bring a sense of justice and “victory” to so many, can there be any winners in such a horrific tragedy?

How does one find solace in the incarceration and condemnation of a fellow human being? How does one reconcile the simultaneous feeling of relief that some modicum of justice has been served for the needless death of a man whose life was brutally and wantonly taken for an alleged misdemeanor crime, along with the pain and sadness that his family and millions across the globe feel because they can’t escape the outrage they felt watching George Floyd beg for this life for an agonizing 9 minutes and 29 seconds.

While the conviction of Derek Chauvin does serve as some semblance of justice for which myself and many others like Floyd’s family are grateful to see, my sense of humanity does not allow me to find any joy or pleasure in watching another life figuratively lost, even if he did commit one of the most heinous crimes I ever could imagine.

Every time I think of the video, I have a visceral reaction because I see myself under Chauvin’s knee. As a Black man, I know that could have been me!

Make no mistake, he should be punished to the full extent of the law, but this one trial and conviction has done nothing to stop the ongoing slaughter of African American lives at the hands of police in cities and towns across the nation.

Even during the trial, another Minneapolis-area police officer killed an unarmed Black man, Daunte Wright, 20, during a traffic stop. In recent years, news reports have detailed numerous cases of unarmed Black people being killed at the hands of law enforcement. However, comparatively, few officers have been disciplined or lost their jobs and even fewer convicted of a crime related to that death. That’s left Blacks, including many in my family, frustrated and disillusioned, resulting in the increasing erosion of faith in the institutions of policing and the criminal justice system in America.

In this case, though, the guilty verdict has brought a measure of hope that the system can sometimes provide justice deserved.

“I do not completely feel relieved, but at least as they say quote-unquote, ‘The system worked,’” said my cousin Bryant Lee, 67, who lives in Southern California. “(With) the evidence that was presented, we had 12 individuals sitting on the jury that got it. Going forward, we need to really focus on trying to turn this thing around with all these ways we’re policing our cities and communities.”

“Guilty is the right verdict. I feel that justice was served,” said my mother Willa Lee, 79, who lives in suburban Chicago — a place with its own long history of police misconduct.

“Well I’m happy because finally there seems to be some justice that occurs for the murder of George Floyd,” said my spouse Bridget Shears. “Now if somehow he gets some piddly sentence and within a few years he gets to go back to living his life and have time to write a book, make a bunch of money or live his life out like George Zimmerman who gets to say whatever he wants whenever he wants to say it as if he was vindicated even though he wasn’t, that won’t make me really happy.”

While some may be glad for the guilty verdict, others will find it equally objectionable, feeling the police are unfairly vilified for “doing their job” even when it results in unarmed people losing their lives. I’m not sure I understand that sentiment, especially in a climate where today the killing of unarmed people of color seems to be an all too common occurrence.

I’m not sure what it will take to stem the tide of discord between police and African Americans. I know a good start would be holding law enforcement accountable for actions that result in serious injury or death to individuals who are handcuffed and compliant. I know that if officers and prosecutors alter their thinking to see an individual’s humanity, not just as a suspect or criminal to be discarded and disregarded.

Treating people with respect generally begets respect in return, which can lower the level of anxiety on either side and reduce the chances of incidents getting out of hand. For the entirety of the trial, my nerves were frazzled and on edge. While I wanted desperately to see a guilty verdict, part of me worried what a not guilty verdict would bring. Mass protests across the country which could increase the chance for even more people and officers injured or killed.

No matter how you look at it, this is and always has been a no-win situation. George Floyd can never be with his family, his friends and now neither will the man responsible for taking his life. At least Chauvin got due process. That was denied Floyd and so many others like him.

As a nation, we have to figure out a way to bridge the growing divide between Black and Blue. The Black Lives Matter movement was born to advocate that the lives of African Americans are just as valuable as everyone else’s, not to diminish the significance of any other human being in any way.

Now is the time to use this tragedy to be the impetus for fulfilling the aspiring principle of recognizing every person‘s humanity. If we fail, then we fail ourselves.

Thu Apr 22 , 2021
Those who object to canceling student debt usually point to income quintiles: People with large quantities of debt—i.e., people who went to graduate school—are more likely to earn high incomes. Some critics even argue that cancellation would be “regressive,” that it would give the biggest boost to high earners and […] 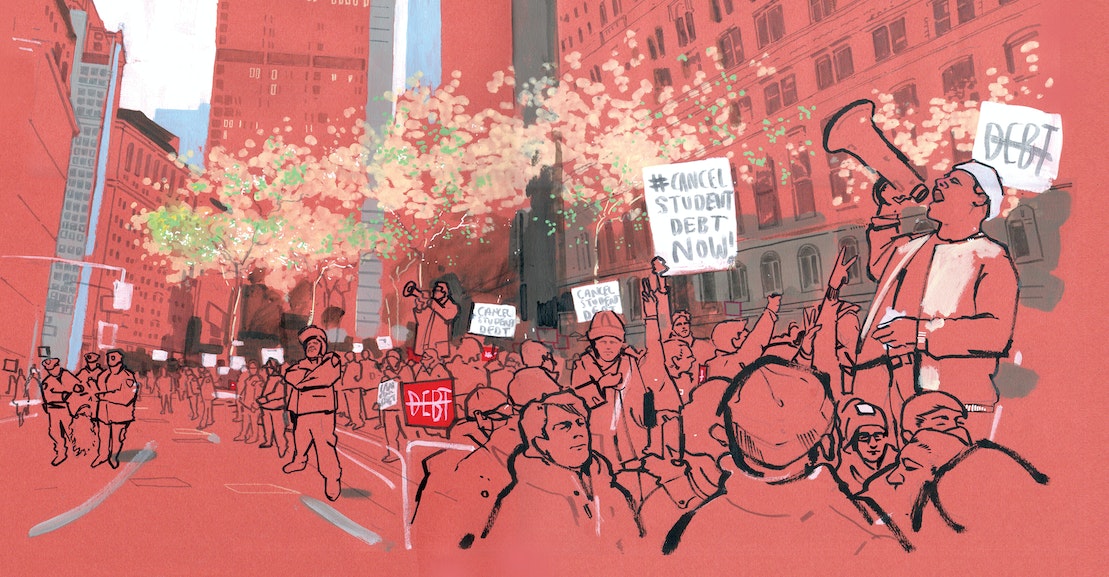